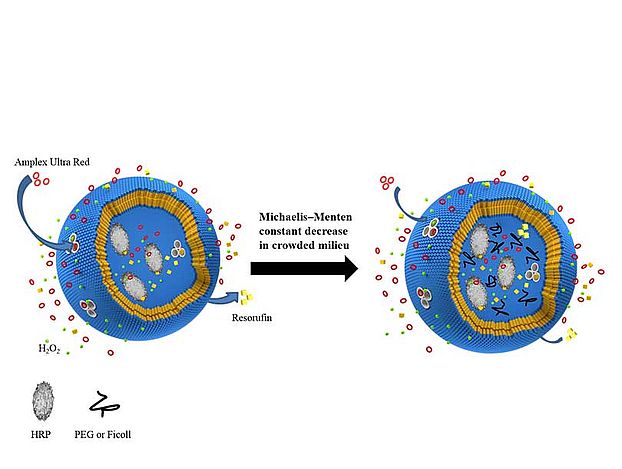 Enzymatic reaction inside a nanoreactor, on the left in absence and of a crowding agent and on the right with molecular crowding. © University of Basel, Department of Chemistry

Enzymes behave differently in a test tube compared with the molecular scrum of a living cell. Chemists from the University of Basel have now been able to simulate these confined natural conditions in artificial vesicles for the first time. As reported in the academic journal Small, the results are offering better insight into the development of nanoreactors and artificial organelles.

The cell interior is densely crowded with hundreds of thousands of macromolecules like proteins, DNA, RNA and smaller molecules forming viscous water solution. In science, this constriction is called “molecular crowding”. The effect can lead to fundamental changes in several of a molecule's characteristics.

The behavior of a “free” protein or enzyme in a test tube does not necessarily follow natural processes, as the cell provides high viscos environment and confined space. In the lab, it had previously only been possible to simulate confined space but not crowded milieu simultaneously.

A team of researchers led by Professor Wolfgang Meier of the University of Basel has now developed a system that comes a significant step closer to the natural model, as for the first time it simulated the crowding effect inside a closed vesicle. “The environment inside a cell has a major effect on the chemical reactions that take place there, so we wanted to copy this in a way coming close to nature as possible,” said Professor Meier.

To create the cellular surroundings, the researchers from the Department of Chemistry made nanoscopic vesicles, so-called polymersomes, and loaded these with the horseradish peroxidase enzyme and a highly viscous solution as crowding components. The kinetics of chemical reactions by a given enzyme could thus be determined for the first time, taking “molecular crowding” into account.The results show that both factors have a strong influence on enzymatic kinetics.

Controlling the speed of chemical reactions

“Our design takes into account the natural environmental factors that influence enzymes’ performance, and therefore brings us significantly further forward in the development of nanoreactors,” said Professor Meier. The results demonstrate that the behavior of enzymes can be specifically controlled using the crowding effect – an important factor in developing artificial organelles for enzyme replacement therapy.

Molecular Systems Engineering is a National Center of Competence in Research (NCCR) funded by the Swiss National Science Foundation (SNSF) and headed by the University of Basel and ETH Zurich. It combines the disciplines of chemistry, biology and physics with bioinformatics and engineering. The scientific aim is to synthesize molecular modules and assemble them in molecular factories approaching the complexity of a cell. These molecular factories will be used for industrial production or to control cellular systems in the field of medicine.