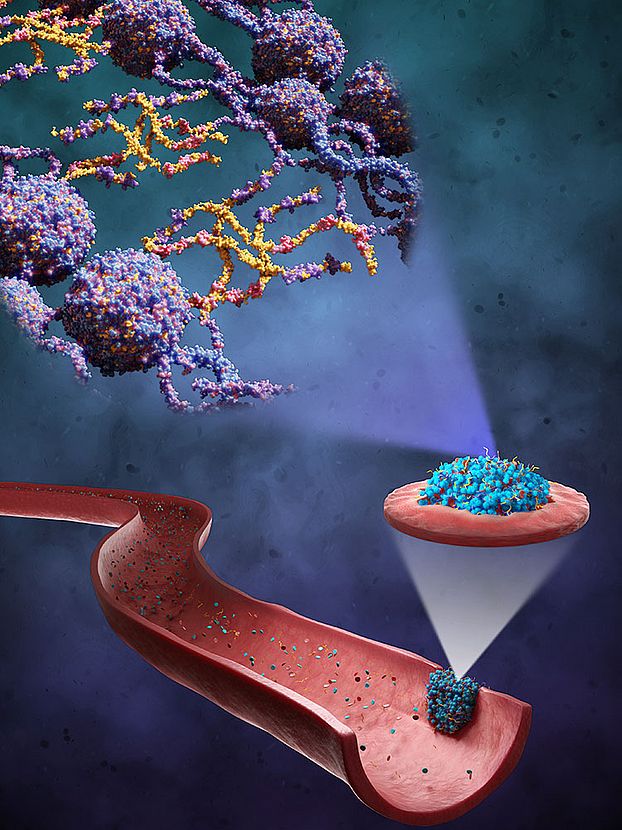 Specially designed macromolecules reinforce the blood clot by binding with the mesh of fibrin strands. (Illustration: University of Basel, Department of Chemistry)

When a serious injury occurs, bleeding can overwhelm the body’s healing mechanisms. Artificial molecules could help by giving a boost to the clotting process.

An accident victim is bleeding heavily. Emergency medics need to act fast. The human body is well-equipped to deal with minor injuries thanks to the process of clotting, an ingenious system for closing wounds. However, if the bleeding is too heavy, the body is simply unable to deliver sufficient coagulation factors to the crucial spot, preventing it from forming a clot and stemming the hemorrhage. In emergencies, medical staff can help the process along by administering coagulation factors isolated from donated blood. “However, substances of this sort are expensive to isolate, have a short shelf life and do not work very efficiently,” says Michael Nash.

The Professor of Molecular Engineering and his team are developing smart molecules that can interact with the body’s own clotting mechanism. The goal is to reinforce the resulting clot so as to close the wound more quickly and effectively – not just in the treatment of major injuries, but also for patients with hereditary coagulation disorders or in cases where clotting is hindered by anticoagulant medications.

When a wound bleeds, a change occurs in the blood flow. This mechanical stimulus acts as a signal for platelets to assemble at the site of the injury. The platelets in turn release a messenger substance that prompts the formation of a mesh of fibrin strands. Together, the platelets and the fibrin mesh form the clot that seals the wound.

“This clot has some interesting mechanical properties: the more tension it is subjected to, the more rigid it becomes,” Nash explains. This is in contrast to the everyday observation that an elastic object, such as a tension spring, loses its structure when subjected to excessive strain: if a tension spring is irreversibly damaged in this way, it loses its elasticity and can no longer pull together or extend. Blood clots, on the other hand, actually become more stable the greater the pressure exerted on them by the bloodstream.

Nash and his team hope to further reinforce these particular properties. To this end, they are working with macromolecules consisting of elastic protein chains, known as “elastin-like polypeptides” (ELPs). In a project funded by the European Research Council (ERC), Nash’s team tweaked ELPs so as to allow them to be recognized by the body’s clotting factors at the wound site and incorporated into the fibrin mesh.

That is not all, however: thanks to an additional trick, the molecules offer a further boost to the clotting process. The ELPs are designed in such a way that their properties change above a certain temperature threshold. At room temperature they are water-soluble, making them easy to store for later use. However, when exposed to the body’s internal temperature of around 37 degrees, they become hydrophobic: like oil in water, which gathers in droplets, the ELPs come together to form nanoparticles, allowing them to circulate in the bloodstream for longer and remain stable. Moreover, this high concentration of ELPs in nanoparticles reinforces their chemical bond with the fibrin strands.

n laboratory tests, Nash and his colleagues observed that these special properties of designer molecules gave rise to clots with thinner but more compact and stiffer meshwork, and therefore more stable. Moreover, these modified clots take longer to be broken down by enzymes in the body, which could favor the healing process in certain cases. The development has already been patented, and preclinical trials with laboratory animals are planned.

The team’s research and development work on blood clotting is part of a wider topic: the stability of macromolecules, which are increasingly widely used in medicine, above all in the form of antibodies and enzymes. Besides designing macromolecules with potential therapeutic applications, the team is also researching natural phenomena that could serve as inspiration for the properties of these novel molecules. They are especially interested in reactions to mechanical stimuli, such as the signal that triggers the clotting process. “Very little research has been done into just how proteins perceive and process mechanical stimuli,” says Nash.

For example, in the world of proteins there are mechanisms whereby a protein under tension is able to cling harder to an object it binds to. The research team in Basel recently described a mechanism of this sort in gut bacteria, which were able to keep their hold on cellulose fibers in spite of the powerful shear forces at work in the digestive tract.

Tricks of nature like this one could potentially be exploited in biopharmaceuticals, for instance allowing them to react to mechanical stimuli and change their behavior accordingly. A potential application of these properties might consist in enabling nanoparticles to lodge themselves in tumors without being washed away by the flow of blood, for example. “Engineering biomolecules to adhere specifi cally to certain structures, tissues or cells: this will be the key to developing targeted therapies that act only where they are needed but spare the rest of the organism,” concludes Nash. “We are excited about where our approach will take us.”