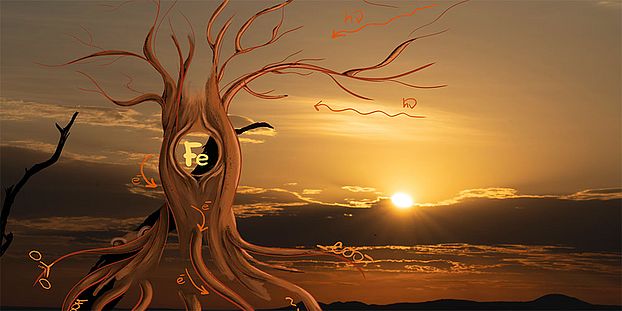 The promising new solar cells rely on iron compounds as sensitizers. They are bound to the semiconductor via carboxylic acid groups. In addition, branched alkyl groups optimize the arrangement of the compounds on the surface. Image reproduced with the permission of the Royal Society of Chemistry)

Solar energy plays an important role in the fight against climate change as a substitute for fossil fuels. Dye-sensitized solar cells promise to be a low-cost supplement to the photovoltaic systems we know today. Their key feature is the dye sensitizers attached to their surface. Researchers at the University of Basel continue to improve the performance with sensitizers using iron – a commonly available and environmentally friendly metal.

Sensitizers are intensely coloured compounds that absorb light and convert its energy into electricity by releasing electrons and “injecting” them into the semiconductor.

So far, the sensitizers used in the dye-sensitized solar cells have either been relatively short-lived or demanded the use of very rare and expensive metals. The holy grail of photovoltaic research is therefore the development of sensitizers using iron – a metal that is both environmentally friendly and the most abundant transition metal on our planet.

For many years, experts considered iron compounds to be unsuitable for these applications because their excited state following light absorption is too short-lived to be of use for energy production. This changed around seven years ago with the discovery of a new class of iron compounds with what are known as N-heterocyclic carbenes (NHCs).

The research group headed by Professor Edwin Constable and Professor Catherine Housecroft at the University of Basel’s Department of Chemistry has been working with these compounds for a number of years. The team led by project leader Dr. Mariia Becker now reports on their results with a sensitizer based on a new family of NHCs in the specialist journal Dalton Transactions.

A bit of vinegar and grease

“We knew that we had to develop materials that would stick to the surface of a semiconductor and whose character would simultaneously allow the arrangement of the functional light-absorbing components on the surface to be optimized,” explains Becker.

The researchers used a two-pronged approach to these challenges: firstly, they incorporated carboxylic acid groups (as found in vinegar) into the iron compound in order to bind it to the semiconductor’s surface. Secondly, they made the compounds “greasy” by adding long carbon chains that made the surface layer more fluid and easier to anchor.

These dye-sensitized solar cell prototypes only achieved overall efficiency of 1 percent, while today’s commercially available solar cells reach around 20 percent efficiency. “Nevertheless, the results represent a milestone that will encourage further research into these new materials,” says Becker with conviction.