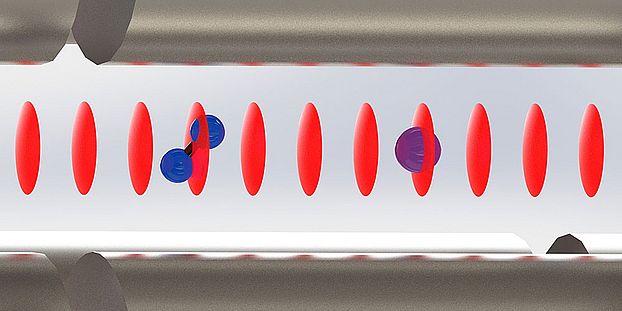 A charged nitrogen molecule is interrogated by a charged calcium atom in an optical lattice. (Image: University of Basel, Department of Chemistry)

Researchers of the University of Basel have developed a new method with which individual isolated molecules can be studied precisely – without destroying the molecule or even influencing its quantum state. This highly sensitive technique for probing molecules is widely applicable and paves the way for a range of new applications in the fields of quantum science, spectroscopy and chemistry, as the journal “Science” reports.

Spectroscopic analyses are based on the interaction of matter with light and represent the most important experimental tool to study the properties of molecules. In typical spectroscopic experiments, a sample containing a large number of molecules is irradiated directly. The molecules can only absorb light at well-defined wavelengths which correspond to energy differences between two of their quantum states. This is referred to as a spectroscopic excitation.

In the course of these experiments, the molecules are perturbed and change their quantum state. In many cases, the molecules even have to be destroyed to detect the spectroscopic excitations. The analysis of the wavelengths and the intensities of these excitations provide information on the chemical structure of the molecules and their motions such as rotations or vibrations.

Inspired by quantum methods developed for the manipulation of atoms, the research group of Prof. Stefan Willitsch at the Department of Chemistry of the University of Basel has developed a new technique which enables spectroscopic measurements on the level of a single molecule, here as an example a single, charged nitrogen molecule. The new technique does not disturb the molecule or even perturb its quantum state.

In their experiments, the molecule is trapped in a radiofrequency trap and cooled down to near the absolute zero point of the temperature scale (approx. -273 °C). To enable cooling, an auxiliary atom (here a single, charged calcium atom) is simultaneously trapped and localized next to the molecule. This spatial proximity is also essential for the subsequent spectroscopic study of the molecule.

A single molecule in an optical lattice

Subsequently, a force is generated on the molecule by focusing two laser beams on the particles to form a so-called optical lattice. The strength of this optical force increases with the proximity of the irradiated wavelength to a spectroscopic excitation in the molecule resulting in a vibration of the molecule within the trap instead of its excitation.

The strength of the vibration is thus related to the proximity to a spectroscopic transition and is transmitted to the neighboring calcium atom from which it is detected with high sensitivity. In this way, the same information on the molecule can be retrieved as in a conventional spectroscopic experiment.

This method, which is a new type of force spectroscopy, introduces several new concepts: First, it relies on single molecules instead of large ensembles. Second, it represents a completely non-invasive technique as detection is accomplished indirectly (via a neighboring atom) and without a direct excitation of spectroscopic transitions. Therefore, the quantum state of the molecule is left intact, so that the measurement can be repeated continuously. As a result, the method is much more sensitive than established spectroscopic methods that rely on the direct excitation and destruction of a large number of molecules.

There is a range of prospective applications of the new method, Prof. Willitsch explains: “Our type of force spectroscopy allows extremely precise measurements on molecules which are not possible with conventional spectroscopic techniques. With the new method, one can study molecular properties and chemical reactions in very sensitively and under precisely defined conditions on the single-molecule level. It also paves the way for investigations of very fundamental questions such as ʻAre physical constants really constant or do they vary with time?ʼ A more practical application could be the development of an ultraprecise clock based on a single molecule – or the application of molecules as building blocks for quantum computers.”