Catalytic methods for the synthesis of enantiomerically pure compounds are of great importance for the preparation of biologically active substances such as pharmaceuticals, vitamins, fragrances or crop protecting agents. The major research focus over the last three decades was on the development of new, generally useful classes of chiral ligands that allow a metal-catalyzed process to be controlled in such a way that one of two enantiomeric products is formed with high preference over the other. By studying the effect of chiral ligands on a metal-catalyzed process, we also gained insights about the reaction mechanism and the specific interactions between the catalyst and the substrate that enable stereochemical control.

Typical examples of the ligands developed in our group are shown below. 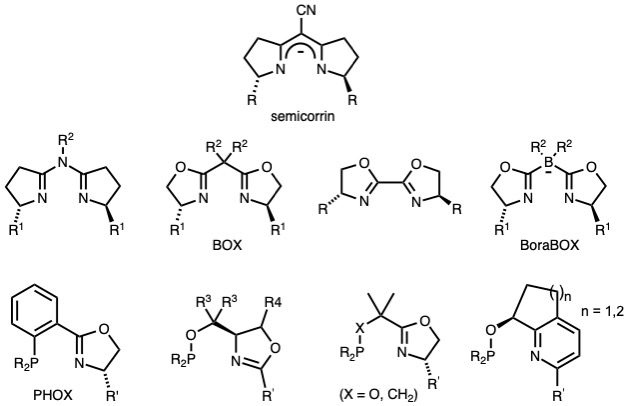 Among the reactions investigated in our laboratory are cyclopropanations, allylic substitutions, Heck reactions, 1,4-additions, cycloadditions, and hydrogenations of C=C and C=N bonds with a major focus on iridium complexes with chiral P,N-ligands. These complexes have proved to be excellent catalysts for the hydrogenation of unfunctionalized olefins, a class of substrates, which gives poor results with chiral rhodium or ruthenium catalysts. Iridium catalysts were also successfully applied to various functionalized olefins, for which no other chiral catalysts were available. 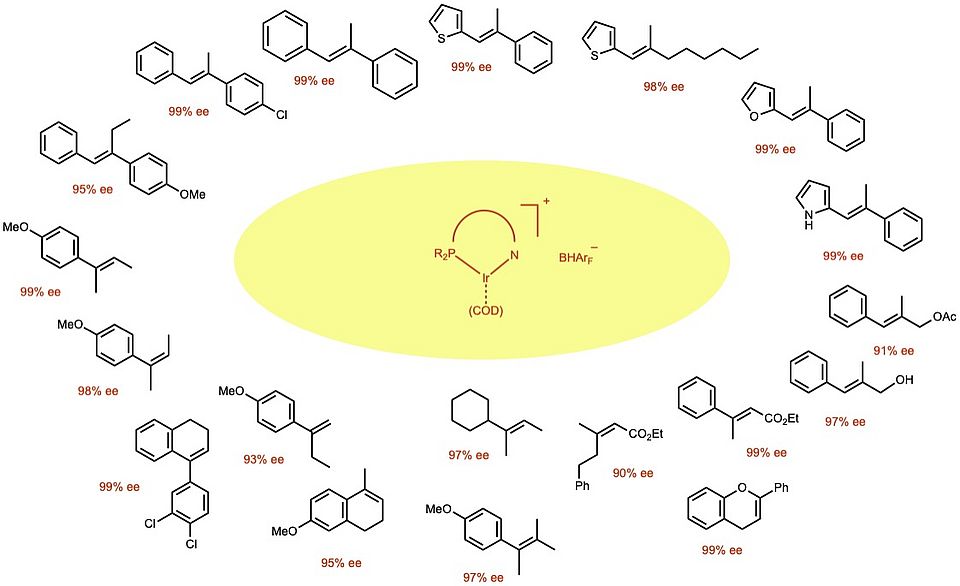 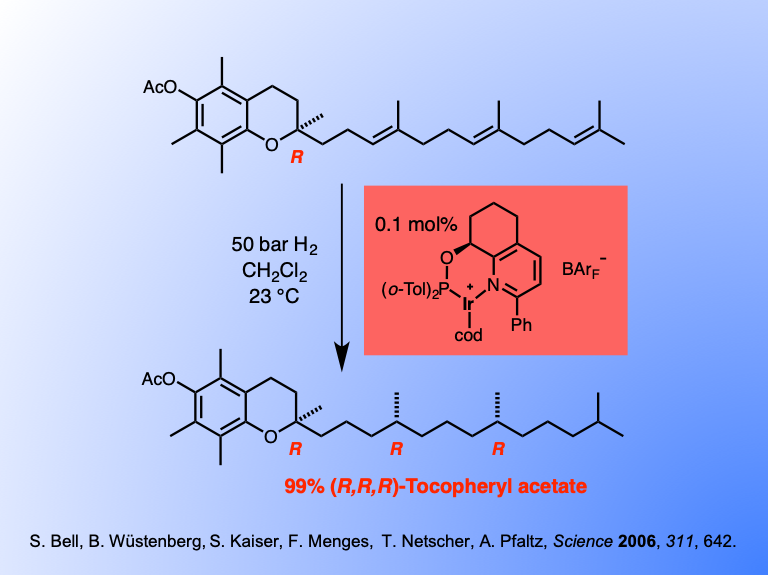 Discovery and optimization of chiral catalysts for asymmetric synthesis is still a slow process, because our present knowledge is not sufficient to allow rational design of new catalysts. Therefore, the development of combinatorial methods for the preparation and screening of catalyst libraries has become an important research focus. During the last decades, efficient techniques have become available that allow high-throughput parallel screening of chiral catalysts. However, parallel screening, which involves product analysis of individual reactions with a single catalyst, has potential pitfalls. Often the enantioselectivity of a reaction is lower than the inherent selectivity of the catalyst, due to an unselective background reaction, catalytically active impurities or, as often found with chiral metal catalysts, partial dissociation of a chiral ligand producing an achiral catalyst. Problems of this kind would be avoided if the catalyst's ability for enantiodiscrimination could be determined directly from examining catalyst-reactant complexes rather than product analysis. In principle, such a method could distinguish between intermediates derived from different catalysts and thus allow simultaneous screening of catalyst mixtures. We have recently developed a screening method based on this concept, using electrospray ionization mass spectrometry (ESI-MS) as an analytical tool This method was successfully applied to screen catalysts for palladium-catalyzed kinetic resolution of allylic esters.

When an equimolar mixture of two mass-labelled quasienantiomeric substrates 1a and  1b was treated with a chiral Pd catalyst and the anion of diethyl ethylmalonate as the nucleophile, the ESI-MS showed the expected signals of the corresponding allyl intermediates A and B with the characteristic isotope distribution of palladium. The ratio A/B is equivalent to the selectivity factor of the kinetic resolution. Experiments with numerous ligands showed that the ratios measured by ESI-MS correlated very well with the selectivity factors determined by kinetic analysis of preparative reactions. Screening by ESI-MS is fast and operationally simple, as it does not require work-up or purification steps and only minimal amounts of substrate are needed. Moreover, mixtures of catalysts with different molecular masses can be screened simultaneously, which is not possible with methods relying on product analysis. In this way catalyst libraries prepared in one batch by combinatorial methods can be screened without the need to synthesize and purify the catalysts individually.

According to the principle of microscopic reversibility the transition states of a forward and the corresponding back reaction are identical. Consequently the enantioselectivity determined for the back reaction will be the same as the enantioselectivity of the forward reaction. The back reaction leading from two enantiomeric products to an achiral compound can proceed by kinetic resolution with a chiral catalyst. Therefore, if conditions for catalyzing the back reaction are found, ESI-MS screening of reactions of achiral substrates leading to enantiomeric products becomes possible, starting from mass-labelled quasi­enantiomeric products. The feasibility of back reaction screening was demonstrated for palladium-catalyzed allylic substitutions, copper- and organocatalyzed Diels-Alder reactions (see Scheme below), organocatalyzed Michael additions and aldol reactions, conjugate additions of aldehydes to nitroolefins, and Morita-Baylis-Hillman reactions. 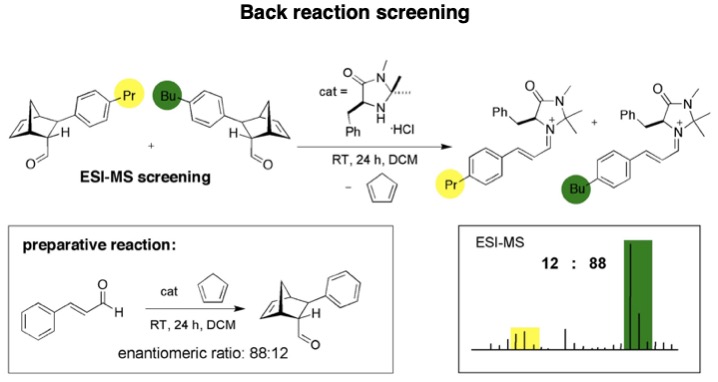